So, Sherry came over to play yesterday afternoon, and convinced me that Halloween was coming sooner than Christmas, so I should create something for that instead of the Christmas tags I had been planning on (although she was working on Christmas....okay, it's for a swap and there is a deadline involved, but still...)

I wanted to do something different instead of stamping, so I pulled out some stencils to see what struck me, and then needed my Sizzix paddle punches, and some embossing powder, and...  Anyway, the result of Round 1 is this: 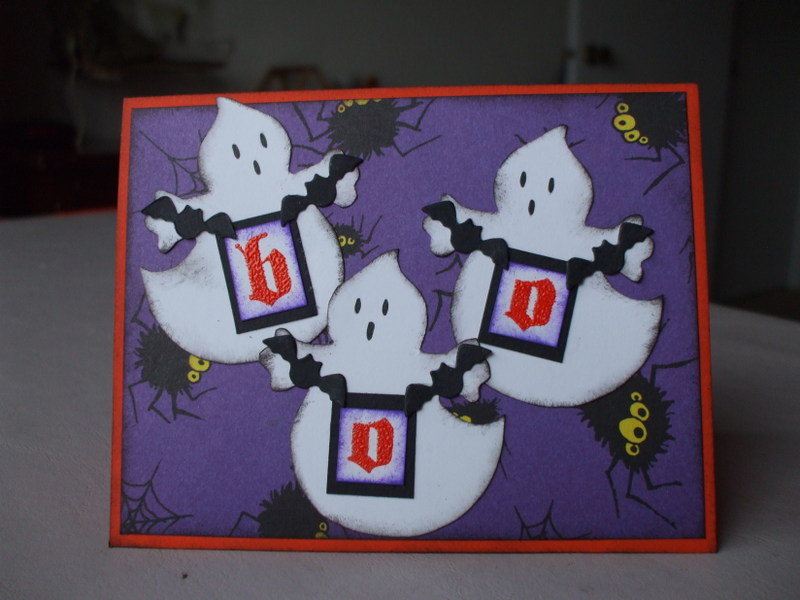 Patterned paper is Provo Craft, alphabet stamps are Martha Stewart Halloween Typeface, bats are the Sizzix paddle punch.  I guess I didn't get it out of my system last night, because today I made this one: 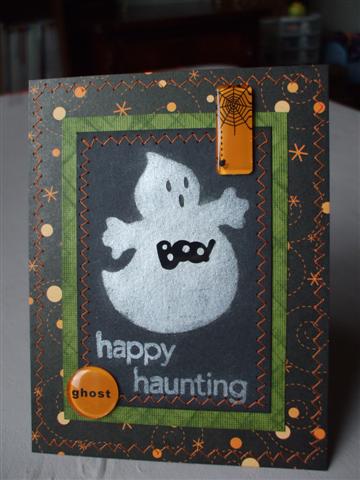 Green cardstock and the patterned paper are DCWV, epoxy stickers are from JoAnn's.  The ghost was done direct-to-paper with a Ranger Perfect Medium stamp pad and Ranger Perfect Pearls in silver, as was the sentiment, which is from the CTMH set "Halloween Fun".  The "Boo" sequin is from a random Halloween pack I picked up somewhere.  This is the first time I've stitched on a card, although I've been sewing for almost 40 years now!  I was as nervous about it as if I was a beginner!  Craziness...

Well, the laundry is calling me, the cupboards are bare, and I've been playing all day, so I guess I should get back to "real life" now...  I know, I know - still no tutorials.  They're coming, I promise!  I just keep getting sidetracked (don't pretend it doesn't happen to you).  Later!

Posted at 11:57 AM in Papercrafts | Permalink

Sue - I ABSOLUTELY LOVE this card!!! AWWW is all I can say! I wish I had made it-really! I adore halloween cards!

Those cards are so cute! I love the ghosts! Who makes the ghost stencils?

I am loooooooving the stitched card... soooo cute!!! Thanks for sharing!