I finally got my gel pen yesterday, and started a card with that technique I've been wanting to try, but - as often happens with me - I got sidetracked with a different project altogether.  When I was browsing in Michael's, I came across Carol Duvall's book.  There was a project in it that caught my eye, and I wanted to try it out while it was fresh in my mind.  I don't know what she called it, but I believe it's called a "meander" book, and it only uses one sheet of paper for the base.  There is a tutorial for it here, although the one in the book had a slight difference (which I will point out below), and Beate Johns has a tutorial for a different one on SplitCoast Stampers.  Anyway, here's mine: 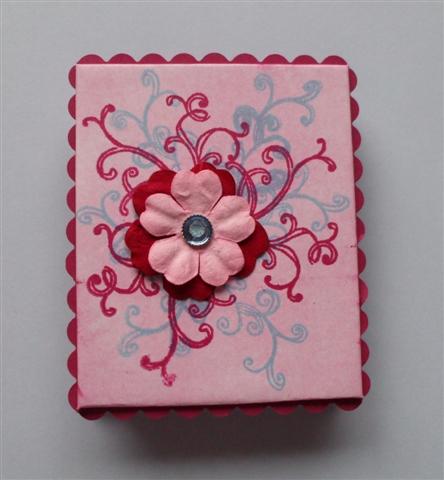 I used the same ponytail elastic closure as on the keychain mini-album, but sandwiched it between the front cover and inside pages, because I didn't want it to show on the front.  I stapled it from the inside before adding the pages, and the cover embellishments hide the staples on the outside.

I didn't have a ponytail elastic that matched, but I did have Purely Pomegranate re-inker and a white elastic, so problem solved!  I was a little (okay, a lot) impatient about waiting for it to dry, so I stretched it out by looping it around my thumb and forefinger and using a blowdryer on it.  Note to self:  wear gloves next time - the rings of ink are not an attractive addition to my fingers!  Also, if you look really close at the pic (or even just kind of close) you can also see some ink along the edges of the cover where the still-damp elastic rubbed while I was positioning everything.  I was at the "I don't care" stage of the project, though, so deal with it...

Here are a few pics of the "work in progress", with the changes noted: 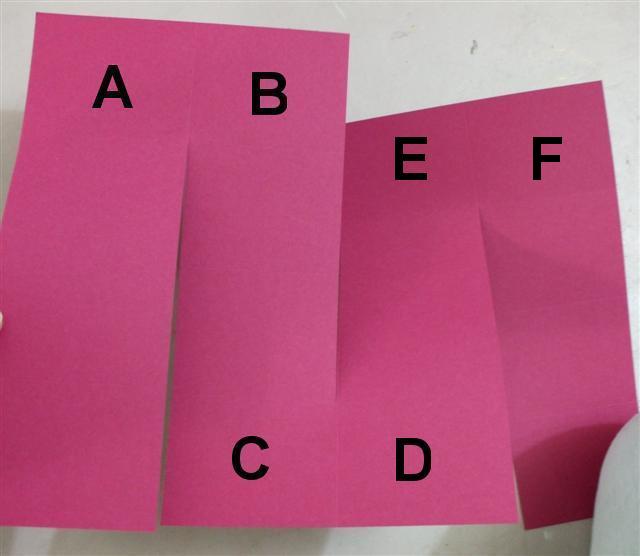 The first pic shows the cuts.  You will accordian-fold the strip ending in square "A", which gets folded back and glued to square "B", then continue accordian-folding until you fold square "C" back and glue it to square "D", then continue until you fold square "E" back and glue it to square "F".The second is how it looks after all the folds are made, but before you glue the "extra" pages together.  My understanding is that if you want a true "meander" book, you just fold it and continue on without gluing, but I like the "tidiness" of this method.  This next pic shows an overhead view after the gluing: 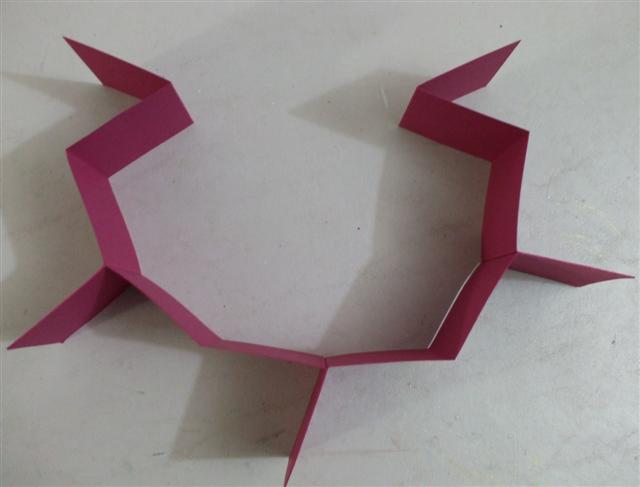 The other pic shows some of the inside pages after the papers are added, and this last one shows the back cover with the elastic (and some extra ink, which I already accounted for...)  I also used the back cover to play with positioning for images on the front cover, so it's a little wonky-looking (don't care): 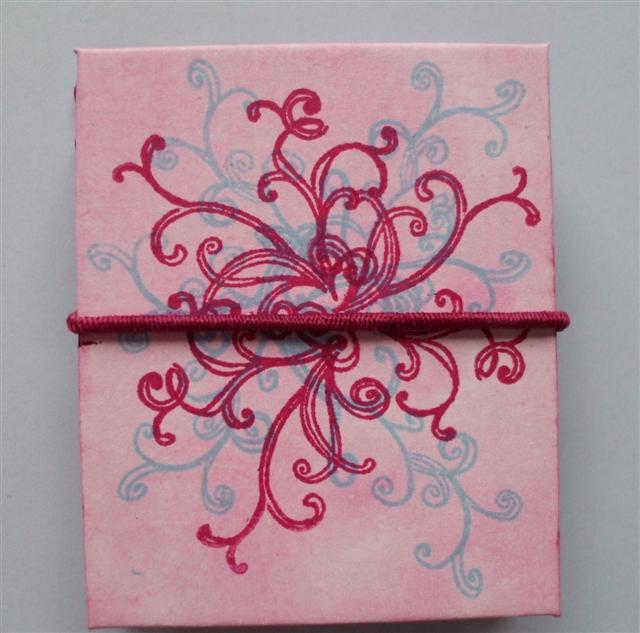 If I seem a little unconcerned about how "polished" this product is, please understand that what I am posting here is an experiment - a prototype - and I don't care if it's perfect - perfection comes into play on the second - or third, or fourth... - but I give myself free reign to PLAY.  I am trying new things, and they will either be successful, or they won't, or a combination of the two, but how do you know what you can do if you never try anything?  IT'S JUST PAPER AND INK, and - last time I checked - I was in no danger of running out of either, and neither are any of the stores/websites I acquire this stuff from!  Do yourself a favor and let go of your attachments to outcome - just go PLAY!!!

Posted at 05:27 PM in Papercrafts | Permalink