Another post today - aren't you so stoked?  Just kidding, but I'm kind of proud of myself that I managed to fit in time for more than one creative project today!  The "ways to use it" challenge on Splitcoast today was to use charms in some way.  I have quite a few laying around, but I knew immediately which one I wanted to use.  I didn't want to make a card with it, so instead I made one of the keychain mini-albums I posted a tutorial for last fall: 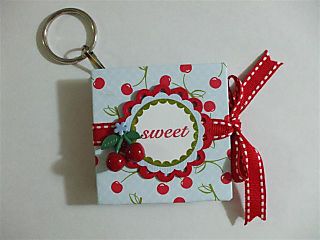 Isn't that little cherry charm the cutest?!  I attached it with a flower brad through one of the holes I punched in the scallop circle.  All of the designer papers are from the "Summer Picnic" collection from Stampin'Up!, and the cardstock is all DCWV.  I got that great double-stitched ribbon from Michael's, but I have no idea where I got the cherries.  The stamp is from SU's "Sweet on You" set, and is stamped in Old Olive and Real Red.  Here's what the inside looks like:

I love making these - they're so fun and fast!  If you decide to make one, please leave a comment here with a link to yours so I can see, okay?  Thanks!  Okay - beddy-bye time for this girl!  I've been awake since 2:00 this morning, and up and moving since 3:00.  A picture fell off the wall (it was held on - for a while - with foam tape,) and woke us both up.  Greg went back to sleep, but I laid there for about an hour, then gave it up and got up.  Been moving all day since!  Needless to say, I'm a bit tired, so I'm out!  Buh-bye!

Yee-freakin'-haw!  Wonderfulness abounds!  A card I made - me...I made it...me - actually got published!  How cool is THAT?!  I knew about it before now (like, since April), but never said anything before, because I was afraid it wasn't true - I had to wait until I saw it in print to believe it for reals.  At long last my "complimentary issues" came TODAY!  This is the magazine: 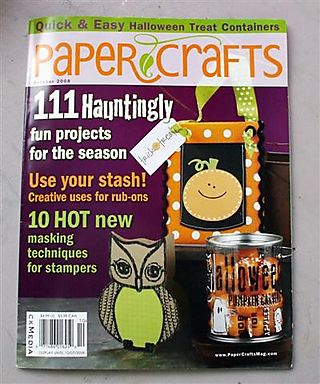 This is what page it's on: 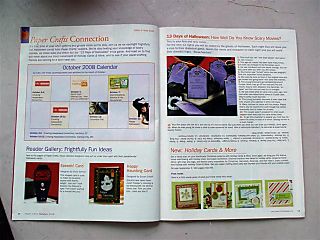 Here's the pic of my card: 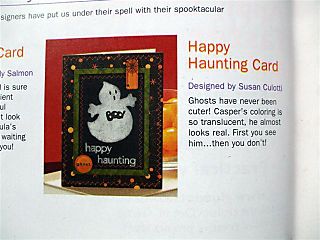 And here's the card for real: 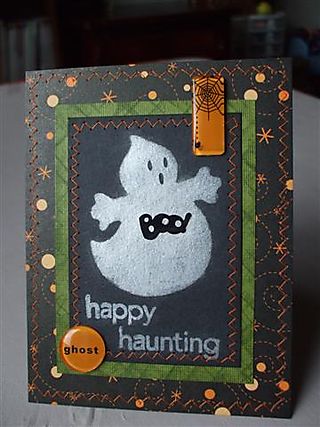 This is the first - and only - thing I've submitted to a magazine.  Kinda cool that it made it in there!  I'd pretty much forgotten about it when I got the email from PaperCrafts asking if they could use it!  You just never know, eh?

Okay, that's WAY more than enough of tooting my own horn, so I'm gonna go see what's in the rest of the magazine!  Have a great night (I am!)

I consider myself an "equal opportunity stamper" - I just love EVERYBODY!  I read your blogs and gaze at your galleries and know that I am not alone.  There are so many great stamp companies producing so many varieties of great images, that it's impossible - for me, at least - to stay loyal to only one!  Lately I've had a love affair - bordering on an obsession - with Inkadinkado.  It's like they went inside my head to see what stamps I wanted, and then went and made them for me!  I've purchased 32 stamp sets from this company since early spring (including two over the weekend, and three last night)!!!  And yet, there are at least five more sets I require (just off the top of my head) SOON!

The first stamp sets I ever bought (as opposed to individual stamps) were from Stampin'Up! back in 1995.  I still have them, too!  My friend Sherry just recently signed on as a hobbyist/demo for them, so I'm more than happy to support her new venture!  Once upon a time she and I were both Close To My Heart consultants, so I have a few (hundred) of their sets, too!  I find that I don't part with any of them easily, if at all!  CTMH had a "Stampganza" a couple of months ago, where you got a free set for every two you bought, so I went a little nuts there, and then they came out with their new catalog and there were a few "have to have"s in there, too.

With all of these stamp sets in my space, getting around to applying ink to them sometimes takes a while...  With that said, let's move on to the "projects du jour".  I purchased an absolutely adorable set called "Cottage Floral", but hadn't used it yet, and then CTMH Friends (a Yahoo group I'm in) posted the color challenge for September, and it seemed perfect for this set, so I made this: 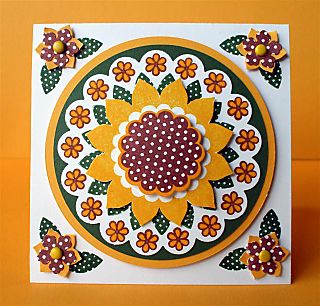 I used four different punches on this card, and they're from EVERYWHERE!  EK Success just came out with new sizes of scallop circles, so I used my NEW 3" and 1 1/4" punches here.  The little polka-dot flower/center in the stamp set is just the right size for the small scallop circle, with just a teensy border around it, which I colored with my Sunflower marker.  The stamp was inked up with Barn Red.  I punched a White Daisy 3" scallop circle, and stamped a little flower in each scallop with Barn Red, then colored it with Sunflower.  The polka dot leaves (there's also an outline leaf in the set, but I didn't use it) are stamped in New England Ivy.  I stamped more Barn Red polka dots onto White Daisy and punched them out with my favorite little flower punch (also EK Success).  The Sunflower blooms behind them were punched with Stampin'Up!'s "Boho Blossoms" punch.  The large Sunflower was hand-cut, and the circles were cut with Creative Memories' shape cutting system (LOVE it!)  I figured there was enough going on here that I didn't need a sentiment.  Everything's pop-dotted for dimension.  I also made two more: 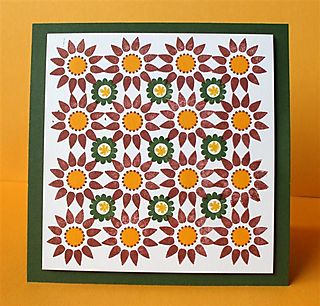 This one was just me playing on my scrap paper like I do...  I really like a lot of the Papertrey Ink cards using a stamp to make a grid like this, so I thought I'd give it a try.  The New England Ivy flower and the tiny Sunflower one inside it are from CTMH's "With Love" set.  Again - no sentiment.  Lastly: 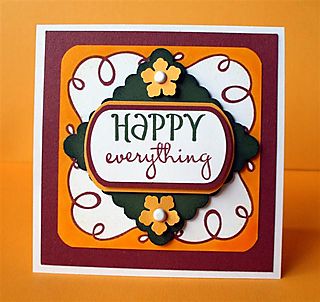 This one was an evolution, and happened by accident.  I was looking for a way to fill the corners on the first card, and thought that it would be fun to have a doodle-y, scroll-y type of thing.  I still had the "With Love" set out on my table and there was a likely-looking stamp there: 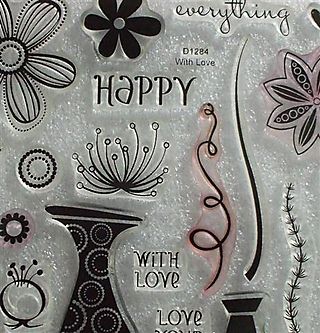 See the squiggly (Now pink-tinted from my ink) one?  I thought it might work, but it was too straight, so I stuck it to the block so that it turned the corner (ah, the versatility of acrylic stamps!), and stamped it four times to make a frame: 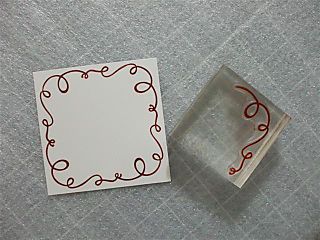 It looked too plain, so I colored just up to the edge of the loopy line with Sunflower, and matted it with Barn Red: 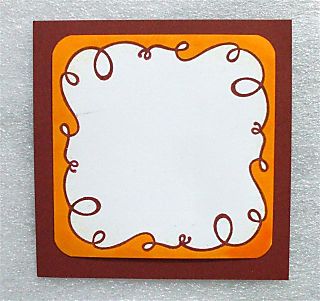 It wasn't the right size to make me happy using it on the punchy card, but now I was well on my way to a whole new one!  I decided the "Happy" and "everything" from the same set would go great in this frame, but there needed to be more to it, so I punched out a New England Ivy scalloped square (Marvy Uchida), sponged the edges and turned it on point for two reasons:  it made the card more interesting, and it covered a smudge that managed to appear within my frame (camouflage is my friend).  I stamped my sentiment, punched it with SU!'s key tag punch, and double-matted it.  Used my fave little flower punch again for some accents, poked a brad in the middle of each - done!

I started out making one card for the color challenge, and ended up with three!  AND, two more of my stamp sets have seen ink! Woo-hoo!  Now I need to pull out the four new Stampin'Up sets I recently acquired, and at least cut the rubber!  Stories for another day, though - I have work to do!  Thanks for stopping by - be sure to make some time to PLAY!