I REALLY wish I had realized there were WCMD challenges on Splitcoast before Saturday night - I really missed out!  Ah well, great inspiration anyway, and I'm still playing!  This is the card I made for the featured stamper challenge: 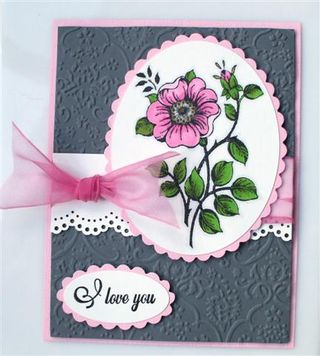 I cased this card by Sherry, who was the featured stamper (no, not my good friend Sherry, somebody else's good friend Sherry).  The things I changed were colors, image/sentiment, and placement of the elements on the card - I did a mirror-image because of the way my flowers were facing.

The image I used is actually part of a background stamp, and how I did it is today's tip.  I taped off the parts of the design that were likely to get inadvertently inked when I was inking up the part I did want: 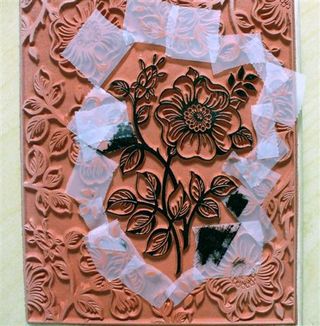 Then took the tape off and stamped the image onto the cardstock (make sure you take the tape off- I've forgotten before, and it isn't pretty!).  Perfecto! 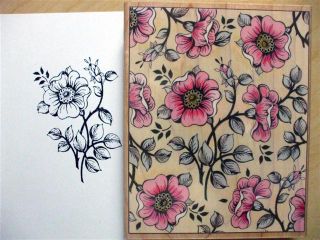 Isn't that a gorgeous stamp?  It's by Delta, and I've had it for eons (first time it's seen ink, though, if you can believe that!)  I colored my image with Bic Mark It and Prismacolor markers, then cut it into an oval with my Creative Memories shape-cutting system.  I mounted it on pink DCWV cardstock and trimmed around it with scallop scissors.  The card base is Stampin'Up! Basic Gray cardstock run through the Cuttlebug with the textile folder and matted with more of the pink.  The sentiment is from Inkadinkado's "Love Letters" set, and I punched it with a Fiskars squeeze punch, then matted it with pink trimmed with the scallop scissors.  The ribbon is from some flowers my MIL got recently (so green and frugal of me to recycle, eh?)  That's it for now!  Ta!

Posted at 08:28 AM in Papercrafts | Permalink

I have picked up this stamp so many times and never bought it --- It is a beautiful image!