While the majority of my days are filled with things that "have" to be done, rather than things I "want" to be doing, sometimes the project(s) I work on have an element or two that make it kinda sorta fun.  I've made the pillows for Hannah's room, and it was fun to figure out how to use the scraps from her "memo wall" to make decent-sized pillows: 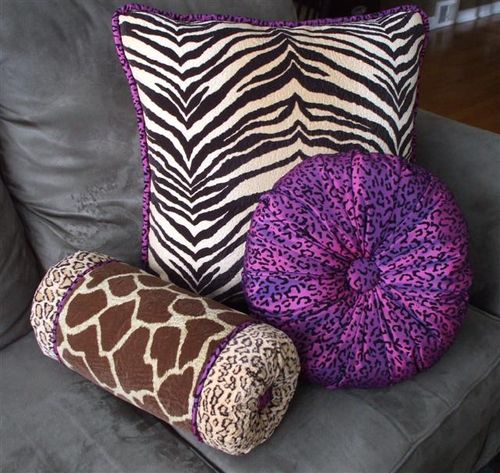 Hannah is mostly into giraffes (as opposed to the other animal skins), so I used bigger pieces on the wall, which meant smaller scraps to use for the pillows.  One answer was to use a strip of it with two smaller strips of the cheetah for a neckroll (made from a strip of batting left over from another job rolled into a "tootsie roll" and whip-stitched together), with taffeta cording and buttons.  A 17" strip of the iridescent taffeta was fashioned into a shirred, round pillow with button tufting.  I had a big piece of the tiger left over, so it became one side of a 24" square  pillow.  The other side is pieced together with a giraffe square surrounded by mitered cheetah strips, with taffeta cording between: I used larger welt cord to make the cording for the outside edge of the pillow.  Hannah's comforter is solid brown, so these pillows should look pretty good against it.

In other news, I finished my coffee-table-turned-patio-bench: 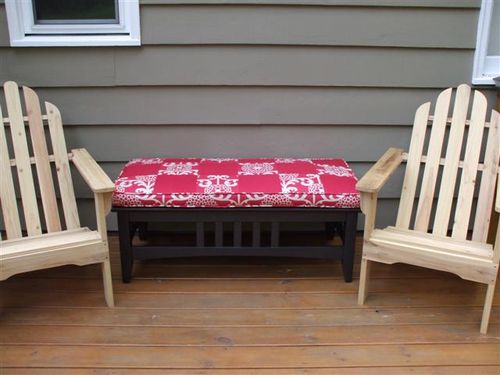 It's hard to see because of the lighting (or lack thereof), but the bench itself has several coats of black spray paint, followed by a couple of coats of "hammered black" spray paint.  Here's a better look at the top of the cushion: And, since it 's reversible, I'll show you the other side, too: Not bad for FREE, eh?  (Well, almost - I did have to buy the webbing to support the cushion and the spray paint)  Next up: staining the Adirondack chairs.  They're going to be RED - the stain color is called "Sangria" - I'm pretty excited about it...

And that's pretty much all I have to share with you today!  Something a bit different from the paper creations you're used to seeing, but I'm trying to share more of all of the different things I do, not just cards and such...

I'm delivering Hannah's pillows today and faux-finishing the walls of the sunroom at the same house, so I doubt I'll be back around later.  Have a fabulous weekend!

Wow, you're quite a talented seamstress - the pillows and bench turned out really well!

Lovelovelove that bench girl and cannot wait to see the chairs when they are finished! Hannah will surely love those pillows.. love how you've done giraffe on one side and zebra on the other... very cool! So glad that you are sharing pictures!

Straight. Up. Amazing.
I'm not gonna lie, I obviously have a bias being your son, but come on, the bench rocks! I'm gonna have to steal it when I come up there. :-D