It just keeps happening, doesn't it?  I know I've been absent for a bit - lots going on in the "Sue-niverse"...  I won't bore you with any of it, just suffice it to say that family takes precedence over blogging - I'm sure that you all understand, and I love you for that!

By now you should all be enjoying some decent weather and flowers and all the rest of it, so here's a happy card to celebrate: 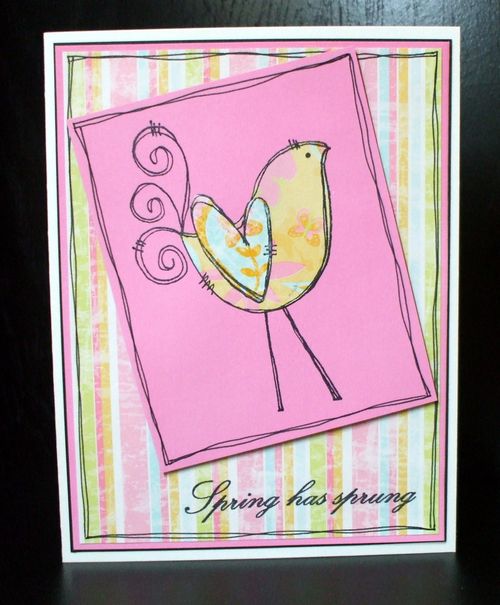 CAS and paper piecing and doodling and bright, happy colors!  SUPER old Close to My Heart papers (Precious Paisley) and a new-to-me stamp - Stephanie Ackerman for Purple Onion Designs Curly Bird.  The sentiment is from About Art Accents.

In between all of the family doings I've been reading Danielle LaPorte's The Desire Map and going through the workbook - good stuff!  I haven't read anything this inspiring since around Christmas, when I gifted everyone in my family Mike Dooley's The Top Ten Things Dead People Want to Tell YOU.  I pretty much think you need both of these, by the way...

Speaking of books, my brother (a fellow Scanner and Renaissance Soul) wrote a NOVEL!  Yes, he DID!  It's set in his favorite place - southern California surf scene (he's hard-core, but currently land-locked in Indiana) - and is a great read, I promise!   It's called Neap Tide which, according to dictionary.com, is "either of the two tides that occur at the first or last quarter of the moon when the tide-generating forces of the sun and moon oppose each other and produce the smallest rise and fall in tidal level".  So now you know... :)

This particular brother (I have three - and two sisters, too) is my inspiration.  He's a Scanner/Renaissance Soul who actually DOES all of the different things he's interested in, unlike myself who gets flummoxed as to which direction to head and which thing to tackle...  I'm attempting to sort some of it out, and will alert you as to any progress I might make...*sigh*...

I guess that pretty much brings you up to date!  I hope that you're all doing well, and thanks for stopping by!