So, you may remember this painting from quite awhile back (two years ago, as a matter of fact):

When I bought the canvases for that project, they came in a pack of two and I bought two packs.  Since I only used three for the above painting, I had another blank canvas to play with.  I used only the blues and painted a background, fully intending to use Tim Holtz's Crazy Birds in some configuration on it.  I played around with various ideas and penciled them on large scrap papers and laid them on the canvas and NOTHING was working!  That canvas has been sitting unloved and unfinished in the guest room closet this whole time...

Recently, one of the girls on Splitcoast (bjeans) posted a thread about an item that she saw at Ikea.  It was this: 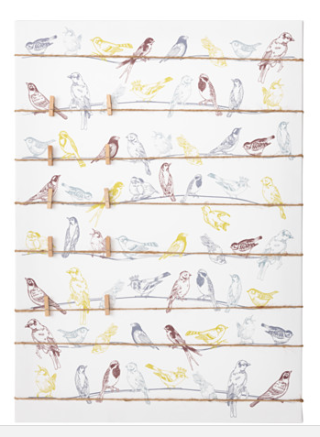 That sparked an idea immediately for how to finish the canvas with the Crazy Birds!  I wasn't able to execute the plan for a couple of weeks after getting the inspiration, but I finally managed it: 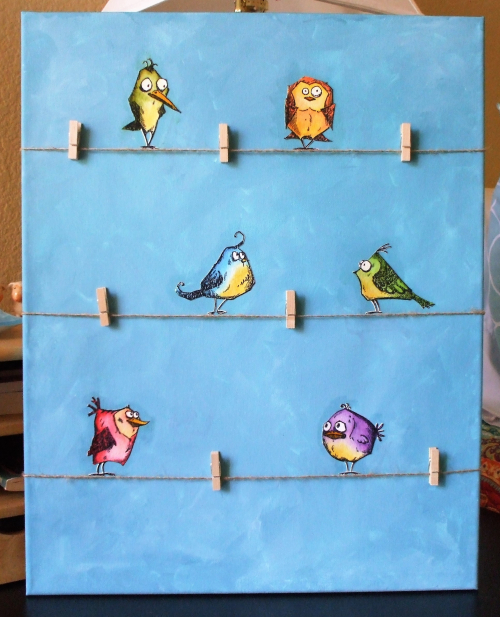 I obviously do not have anywhere near as many birds as the inspiration piece (not as many rows of twine and clothespins, either), but this is also smaller and it makes me happy just as it is!  I had originally intended to make the canvas a piece to go on the blank wall above the toilet in my guest bath, but I've decided that it needs to live in the guest bedroom/craft room instead.  It's going above the small desk where I sit to color and fussy cut...

I stamped the birds on watercolor paper, painted them with distress inks (Wild Honey, Fired Brick, Peeled Paint, Mowed Lawn, Salty Ocean and Dusty Concord), then cut them out with the coordinating dies (bless Tim forever for creating those - these suckers are really difficult to fussy cut), then used Mod Podge to adhere them to the canvas and top-coat them.  The twine is stapled to the inside edge of the canvas frame on the back, and I already had the tiny clothespins (available at most craft stores and Walmart).

And that's the rest of the story!  Thanks for stopping by, and have a great week!

That turned out so beautiful. I will have to get out a canvas and my Crazy Bird stamps and try my hand at it. I do remember that conversation on SCS and so happy to see your result.
Cindy

Wow, I really like your canvas! Well done and so pretty. Love those birds, but have been hand cutting them out... ;)

So cute! And could be a great 'memo' board for temporary 'notes to self'.